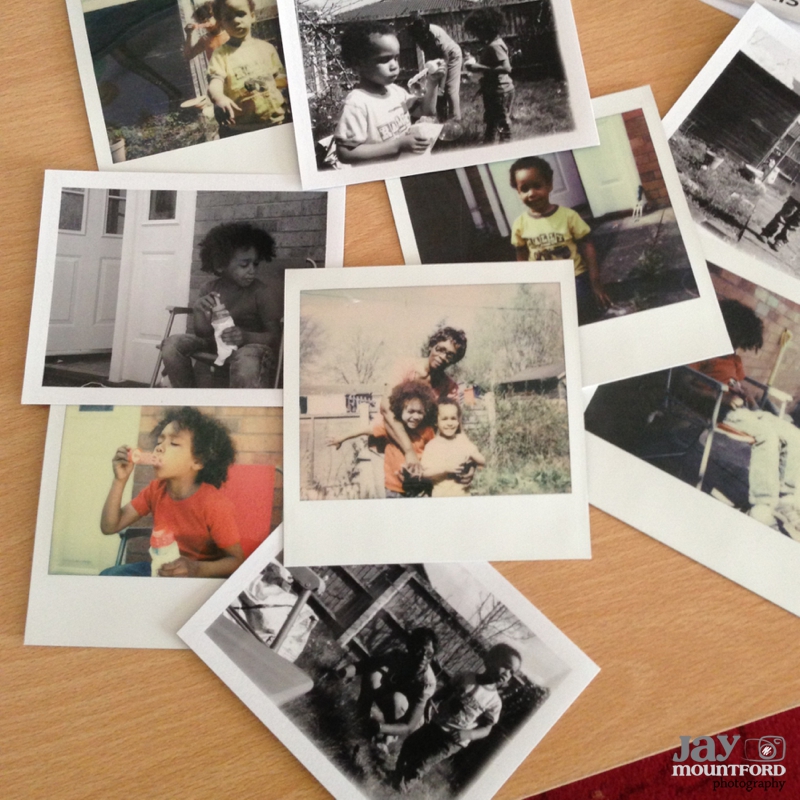 “It’s a long way back to Eden, Sweetheart, so don’t sweat the small stuff.”

Today, The Smalls and I went to go and spend the day round my mom’s house, with my Granddad and Auntie Vie.

Ok, honestly, never even thought I would say those words, let alone type them for all eternity.

I packed a massive bag of food for The Smalls’ lunch and tea, threw all manner of chalk, scooters, bubble mixes, waving wand stick things and other stuff in the boot, and just about every instant film camera I own (with film ready to go) in my car. There was method. I wanted to spend the day and not have to worry about leaving early because I forgot something. I wanted to spend time.

I wanted to take time.

I was shitting it. I was fucking nervous as hell, because I was very aware of Granddad’s deterioration. I knew he wouldn’t be the dude I’d remembered so well from years gone by. I’d already seen how much he had changed in the last few times I had seen him. Both mentally and physically. When I saw him in 2006, he was still climbing trees and very  on the ball. In 2008 he was kind of active and reasonably on the ball. In 2011 I didn’t actually see him move much, but he still seemed on the ball.

That was hard. That was soooooooooo hard.

The dude (yes, dude, because he is/was SUCH a dude) who was sharper than ME most of the time, and more physically active than I could remember, was not there.

He is now using both my crutches, because his walking stick is not enough. He is in extreme pain moving anywhere. Doing anything.

I have to be realistic and understand, that, he is old. Dude is like, 87 years old EIGHTY SEVEN. He’s nearly seen a WHOLE CENTURY, wtf. Can you imagine carting around nearly 100 years worth of memories? I  can’t.

He struggled to remember that, where he was today, was actually Birmingham and not London (where he spent the majority of his last years in the UK). Actually…looking back on today…that’s nothing. Ok, he kept thinking Noah was in fact called Moses (I bloody love that idea), and didn’t realised for a long time that he had never met Isaac (c’mon; they’re his GREAT GRAND KIDS. That’s a lot of descendants to remember) but…he remembered me without question, he remembered that these boys were his great grandchildren, he remembered I played cello, he remembered random things. So many random things.

I have to remember that.

And the odd moment of old age seemed to be letting him down too.

I am tired, and I know that if I ever read this post, it probably won’t make much sense to me. However. Over the last few weeks I’ve been going mental with polaroid film, and I know a ton of people have been telling me to cut the crazy shit out. “Ohhhhh hahah Jay bought yet another camera and more bloody film geeeze Jay time to calm that shit down eh? Hahahahha” NO. No it is not, it is NOT time to calm that shit down.

There’s been method to my madness. There is always method to madness.

I learnt this from my Granddad, if no one else.

See, despite being in denial of Granddad even arriving in this country, I understand the importance of certain things. So, several months of learning to accurately use a polaroid camera have paid off. I shut my mind down to the idea of ever having Granddad around me, or The Smalls. But with this one last chance, I knew I had to make something of it. I know I won’t get stuff printed; I never seem to validate the time to do so, or even FIND the time to select the digital files. But, to be able to take a photo of The Smalls, and be able to give it to Granddad straight away, just seemed logical. It seemed like, given his ever dwindling memory, the one way which might help Granddad remember who is who. Who was who doing what. It’s too easy to forget. SO easy.

Bah. My mind is a mess of all kinds of stuff, and I’m in no state to process anything else. After Corinne’s woodland wedding on Saturday, and the realisation that it’s Isaac’s birthday on Sunday, and trying to remember everything in between…well, I don’t think anything makes sense right now.

BUT, I know THIS. I know the importance of completing my memories. I know how important it is that I capture what I can while Granddad is with us. I know that. Amongst the madness in his mind, there is method. I see it. Probably because I do it myself. And I wanted him to see this normality. I wanted him to be able to go back to Jamaica with a head full of madness but with a sense of normality.

I would never get round to printing anything I take on the dSLR, because I know what I’m like. The perfectionist in me would never send off images to be printed without first being edited, and checked again, and then edited some more…just because that’s what I’m now trained to do. And yet, annoyingly, I would never find time to edit the stuff to send it to be printed. So I took control in a different way; screw the editing, take instant prints. I would hate 3/4 photos, and even worse, many wouldn’t even be valid photos. BUT, I knew it would mean that I could guarantee, somehow, that Granddad would have something to take away, something to remember.

The hardest thing about today was the realisation that, with madness there is method. With method, there is often madness. Granddad seems to consist of both. He grasps the reality of his surroundings, by using method. But this method often makes him sound mad. Thing is, that’s not the stuff I should be worrying about with him. What I should be worrying about is whether I’ve given him enough to tick him over until The End.

So I took the photos. I took many polaroid photos, on various formats. Photos of The Smalls in my mom’s garden, photos of my granddad giving my son his first birthday card celebrating his 4th birthday (he’s the only child in my family to have a birthday card from a great grandparent), photos of The Smalls with their Nanan; the sort of things I want them to be able to look back on many years down the line.

I’ve looked at enough printed photos, and pine for my own. I have masses of files on machines, some barely viewed for a total time of 1 minute. I wanted my polaroids to be spot on, because I knew this would be my last chance. Granddad, though in the UK for another 5 weeks, will not be back. This feels like my last chance to give him something back. This feels like my last chance to thank him for my AMAZING memories, by nourishing the last of his diminishing memories. He’s alert, but not as I remember. He knows what’s what, but it takes effort.

Sometimes, perspective, method and madness is all it takes to know what you should be sweating over.

There’s a lot of method and madness in my head right now. I want it to pass. But not too soon.